When Aarol W. Bud “Irish” passed away in Michigan in 2006 his daughter Teresa found a green army box filled with memories of WWII. Bud always kept this box closed and he seldom spoke of his army period during WWII. Teresa mustered up her courage, opened the box and found hundreds of letters her father wrote to his parents and his love Elaine during the war. These letters describe in detail his adventures and the cruel time he and his comrades experienced. Daughter Teresa and her husband Lt Col Bradley Foster decided to bring together all these letters in a book: “A thousand letters home.”

The book describes for example the story of Bud who served as a corporal in the 102nd Cavalry Reconnaissance Troup. On April 9 1945 near the German village of Steinbergen (Germany) a two jeep patrol drove into an ambush. Heavy machine gun fire raked the road from hidden positions. The crew, including Bud Irish and Don Case,  jumped out and jumped into a ditch. Two light tanks approached to assist the pinned down cavalrymen but were immobilized by Panzerfaust. When the US ammunition was exhausted Nazi SS-troops came forward to finish their job. Bud was laying next to Don Case and he took all the bullets the Germans fired at them. Bud feigned death and survived the ambush. When the Germans were gone he went for help and picked up the dead and wounded. Bud received the Silver Star and the Purple Heart award for his action. Don Case is buried at the American cemetery in Margraten. This event had a massive impact on Bud Irishes life. “I cannot explain but when you know that someone else took the bullets that were meant for you, you have the feeling that you never can do enough to make this up”.

I meet Colonel Bradley Foster at the cemetery in Margraten op the 4th of July 2016, Independence Day. He is visiting the grave of Pfc Eldon Case to pay his respect, a promise he made to his mother in law and to the family of Eldon Case. Without Don, Bud would not have survived the war. More and more people are interested in WWII, most of them without any army or mission experience. They often focus on the heroic acts of the soldiers. Bud Irish writes the following about the life of a soldier.

“Only God knows that the only thing soldiers want is that everything will be over quick and that they can return home to their beloved ones. They don’t want anything extra when they arrive home just everything being the same and first of all they wish to forget all they saw and experienced …. “

This story of Bud Irish is worth reading and sharing. Stories like this might have the effect that children, grandchildren and future generations  are aware of what happened and are aware of the value of peace and freedom. The story of Bud and Don case might motivate people in their daily life as it did for Bud. Finally I offered colonel Foster three copies of our Certificate of Commemoration to express the bond between the adopting family and the American next of kin. The book “A thousand letters home” is available through www.athousandlettershome.com.   Lest we forget. 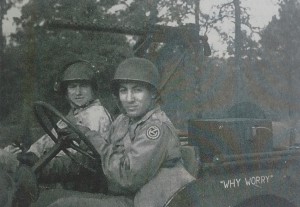 Picture jeep “Why worry” with Bud Irish and driver Borkowski 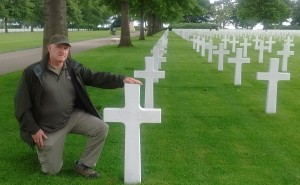