On Saturday May 27, the evening before Memorial Day 2017, the American flag was raised in front of community center Oos Heim in Margraten. The Foundation for Adopting Graves American Cemetery Margraten organised that evening a concert to welcome and honor all American guests in our municipality that came all the way from the States to visit the American Cemetery for Memorial Day. The concert was also meant for all grave adopters. Conductor Jos Dobbelstein with our local harmony Concordia performed a special musical program. On a big screen above the orchestra videos were shown giving the music an extra dimension. Vocal support was given by solists Lien Haegeman (soprano) en Erik Moonen. Deputy mayor Jos Custers expressed his gratitude for the liberation and mentioned the sacrifice that both the American soldiers and their families in America gave for us. The American visitors present were welcomed by an standing ovation. Mr John Wessels, deputy secretary of the American Battle Monuments Commission (ABMC) in Paris expressed his admiration for all the grave adopters who commemorated the American soldiers since 1945 with flowers and a prayer. He was personally moved by this dedication. On behalf of ABMC he awarded three former members of the Adoption Foundation with a Certificate of Appreciation and a medal. Fien Opreij, Jacques Aussems and Jo Purnot were honored for their hard work during more than a decade for the adoption program and with that for the American-Dutch relationship. 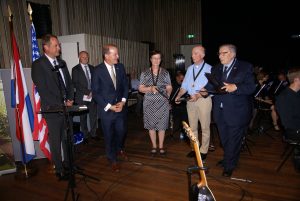 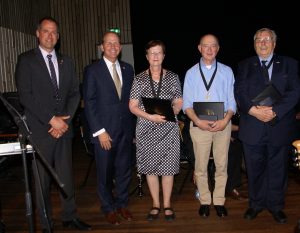 Before the break the concert was about war with film music, the second part had a lighter program with Glenn Miller and a liberation medley with Vera Lynns’ “We’ll meet again”. The audience (full house) was thrilled by the performance of solists Lien Haegeman and Erik Moonen together as well by the professional sound of the orchestra. The Foundation for Adopting Graves American Cemetery Margraten is grateful for all those that contributed to this wonderful concert.