She was very surprised and moved, the 80-year- old American Ruth Schnell when on June 24 she arrived at the American cemetery in Margraten (Netherlands) to visit the gravesite of corporal James B. Radmann, her uncle. She met for the first time the two very young boys who adopted James: the 5-year-old Marcus and the 3-year- old Silas Langelaar from Alphen on the Rhine. Their father Jeroen signed up the boys as adopters shortly after the birth of Silas in 2014. The family visits Margraten a few times a year, and flowers are laid at the grave of James at all occasions.

“Marcus has asked a lot of questions about James. Was James married? And did his wife also fight? Those kind of things. We think it’s important that children also realize that the freedom in which we live is not self-evident and that we owe a lot to these young American heroes”, Jeroen Langelaar states. “For us Margraten is always a special place”. Marcus and Silas are not the only young children that adopt a grave at Margraten. Often a grave is given to children or grandchildren, for example by a parent or grandparents. But there are also young couples who put their child before being born on the waiting list to adopt a grave or the name of a missing soldier, so the Foundation Adoption experienced.

Ruth Schnell of Illinois, with her son Eric and his family from Minnesota, came to Margraten to visit the grave of uncle James for the second time. He was killed in action on April 1, 1945 at Siegen in Germany.

Ruth was seven years old when her parents received the message that James, the brother of her mother Lola, was killed, at the age of 26. He was married to Lorna Stewart and lived in Wauwatosa, Milwaukee Wisconsin. Ruth still vividly remembers that her parents were weeping when they heard the sad news. “It was the only time I saw them weep”. Ruth and her son Eric have visited the cemetery before. For Eric’s wife April and their sons Tim (20) and Matt (16) it was the first time. As usual, the family and adopters were welcomed by the staff of the American cemetery. They laid flowers at James’ grave (plot C, row 7, grave 32), photographs were taken and the cemetery’s family book was signed.

The Schnell family was very impressed with the cemetery with 8301 young countrymen who have been buried here for 73 years and 1722 names on the Walls of the Missing. Ruth told the adopters how grateful she is that Marcus and Silas, by visiting the grave and laying flowers, will remind her uncle forever. All family members and adopters received a Certificate of Commemoration from the Foundation for Adopting Graves in honor of contact and mutual friendship between the Dutch and American families. 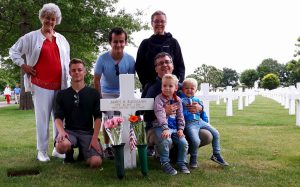 Left to right: Ruth Schnell, Matt and Tim and their parents April and Eric Schnell with the adopters Marcus and Silas. Father Jeroen made the picture.