Dutch family adopted grave of Pfc Charles A. Rocchio since 1946

Elena M. Rocchio was 14 years old when her eldest brother Charles was killed on the 24th of November 1944 near German Geilenkirchen-Prummern. On August 20 she visited, together with her friend Philippe, Charlies’ grave at the American Cemetery in Margraten. “My father never got over Charlies death”, Elena says. “We were all in shock then. My brother Robert got injured in Germany but he survived the war.” Private first class Charles Rocchio was messenger in the 334th Infantry Regiment of the 84th division.
Elena and Philippe travelled by ship in nine days to Hamburg and by train further to Aachen. The adopters An and Louis van de Weyer – Maassen from the Dutch city of Vaals picked them up in Aachen and hosted them during their stay. An and Louis took over the adoption from their parents with whom Charles Rocchio stayed in 1944 for several weeks. His unit was quartered there in the neighbourhood waiting for the oncoming actions in Germany.

An van de Weyer: “My grandfather Alphons Maassen had a café with a Music hall in the village of Nijswiller, where a lot of soldiers stayed overnight. The weather was bad in November 1944 and the soldiers tried to find a place to sleep with local families. The music hall was not big enough and my father (August Maassen) took them to his house in Nijswiller. They slept in the stables next to the house and three of them, amongst them Charles Rocchio, in the kitchen. I was then two years old.”

Charles corresponded with his parents, who lived in Warwick Rhode Island, during his stay with the Maassen family.

When the Rocchio family received the message that Charles was killed in action and buried in Margraten, they contacted August and Marieke Maassen. They adopted his grave in 1946. The family have been tending Charles’ grave for 71 years now.

Elena Rocchio lives in Virginia, near Washington DC. She worked for the US government and was stationed for many years in Germany and Italy. In 1952 she came to Margraten for the first time when she made a trip to Europe after finishing her study. Her parents also have been guests of the Maassen family in Vaals. The adopters themselves have also travelled several times to Rhode Island. 1999 was the last time Elena visited Margraten. “The cemetery has a beautiful infrastructure and is situated in a wonderful environment and I am very happy that I returned here.” After three nights in Vaals Elena Rocchio and her friend Philippe travelled to friends in Zürich. From there they returned home in the US by plane. 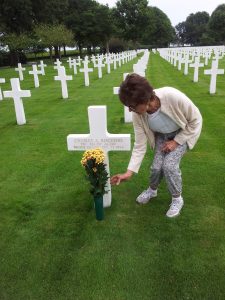 Elena Rocchio at her brothers’ grave 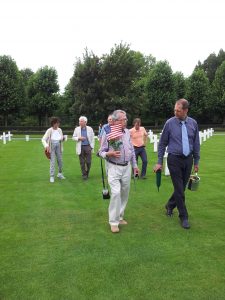 A tour of the cemetery with superintendent Keith Stadler 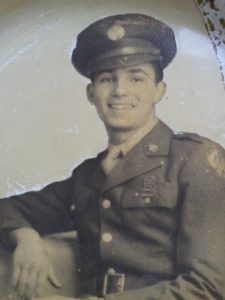