On Tuesday April 11 2017 the bus driver forgets to stop at the American Cemetery in Margraten. His American passengers get out at the next stop and wait for another bus to bring them back. With a little delay they arrive at the burial site of their uncle, SSgt Francis J. Hanner.

On their 50th wedding anniversary Jay en Nancy Hanner decide to visit Europe. They start in Amsterdam and visit the colourful flowers at the “Keukenhof”. A three hour ride by train and bus takes them to Margraten. Here they are welcomed by Keith Stadler, superintendent of the American Cemetery and Frank Lahaye, ABMC staff member. The chairman of the Foundation for Adopting Graves at the American Cemetery, Ton Hermes and the people who have adopted the grave of uncle Francis, Barbara Janssen and daughter Monique Volkers, are also there to welcome them.  In spite of her health situation Barbara puts flowers at Francis’ grave several times a year. Monique assures the American guests that she will take over the adoption once her mother is not capable any more. Jay and Nancy are moved.

Francis J. Hanner grew up in the coal mining community of Rosedale Indiana. Father James was a lawyer and  mother Gertrude ran the general store in Rosedale. They had five children, four sons and one daughter. Three sons served their country in World War II. Clelland joined the Army Air Force and became a bomber pilot, Francis also joined the Army Air Force and became a glider pilot, Jay joined the Marines and drove a tank in the Philippines. Clelland en Jay sr returned home to raise families. Francis was killed in action in Germany 25-years old.

Francis enlisted on 1 April 1941 in Fort Benjamin Indiana. Trained as a gliderpilot he was transferred to 61 Squadron of 314 Troop Carrier Group. On March 24 1945 he was tasked to land ground forces in the vicinity of Wesel during operation Varsity in order to achieve a bridgehead over the river Rhine. In this operation he got killed. Francis received the Air Medal and a Purple Heart for his sacrifice.

Jay and Nancy brought pictures of Francis for the adopters and tell them all kinds of stories about Francis and his family. These stories make clear that Francis sometimes was a bit reckless and imprudent and that he loved to make jokes. Clelland became a lawyer after the war in the current  Hanner, Hanner and Hanner Law Office in Rockville Indiana. Jay sr and sons Jay jr & Francis Jackson and Jay’s sr’s brother Harold all worked together in Indianapolis in construction area.

Frank Lahaye takes the guests to the grave stone of Francis and the flowers are placed together with an American flag. SSgt Francis J. Hanner is the focal point of this meeting, stories are told, pictures shown and Nacy and Jay receive the American flag to take home to remember them of their visit to uncle Francis. On behalf of the adoption foundation Jay and Nancy receive a “Certificate of Commemoration”, stating that the gravesite of Francis is cherished by the adopting family in the Netherlands, Barbara Janssen and her daughter Monique. This meeting between an American family and the adopters means a lot to both, a grateful moment in their lifes. Focal point is Staff Sergeant Francis J. Hanner (23-6-1920 – 24-3-1945), fallen for our freedom, buried and commemorated in Margraten.

Note Foundation for Adopting Graves American Cemetery Margraten:
All 8301 graves as well as all 1722 names in the Walls of the Missing are currently adopted by local citizens. This 100% adoption rate is unique. There even is a waiting list of candidate adopters. If you have a relative buried in Margraten feel free to contact us and we will bring you in contact with the adopting family. You can email us at info@adoptiegraven-margraten.nl 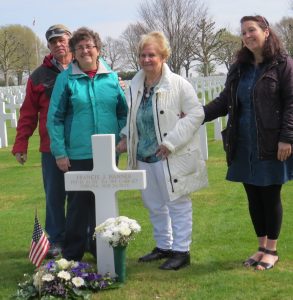 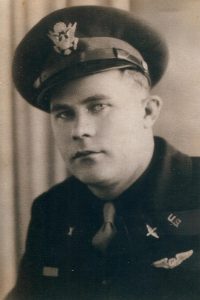