Joan Coleman’s first visit to her brother “Eddie” in Margraten

On December 22 1943 the B-24 of bombardier 2 Lt Edwin Jacobsen exploded mid-air above the Northsea between the Netherlands and England. They returned from a bombing mission over Germany. Lt Edwin Jacobsen was never found and his name is written in the Walls of the Missing at the American cemetery in Margraten.

Almost 73 years later, 9 o’clock am Joan Coleman, her daugther Karen and niece Joan are picked up at the Central Station of Rotterdam by Eric Jansen, the man who adopted Edwin Jacobsen. He offers them a cup of coffee at his house and drives them in his car all the way to Margraten. Near the cemetery they had lunch together to prepare for the important visit.

Joan Coleman is 85 years old but still moving like an athlete. Miranda Prevaes, representative of the ABMC, welcomes the delegation and informs them about the cemetery and the adoption program. She accompanies them to the place where the name of 2Lt Edwin Jacobsen is written in the Wall of the Missing.

The adopter Eric Jansen: ” It was a very special experience to have Joan Coleman, her daugther and niece as guests. She called her brother Eddie. She told me how friendly and gentle Eddie was, how he took her to the cinema as a ten year old little sister and how he took all the time for her when he had leave and was at home. She spoke very tender about the man whose name on the wall changed for me into a real person. She described him as ‘laid back’ and ‘easy going’. I got a bit emotional myself when this old lady blew a kiss to the name of her older brother who she still missed after all these years. 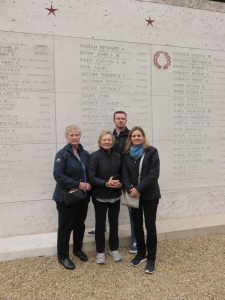