Son of a WWII paratrooper became a US navy pilot

His father William was killed in action on September 17, 1944 near the Dutch castle Heeswijk, but in spite of that the American William Burd jr. chose to become a US navy-pilot. Based on an aircraft carrier he participated in hundreds of operations in Vietnam, back in the sixties. On Thursday August 3, 2017 William Burd jr (74 years) visited his father at the American Cemetery in Margraten.

William (Bill) was here for the first time in 1971, now he was accompanied by his wife Janice (70) and daughter Heather (42). He also met Tammy and Scott Weidmann. Tammy is a niece of Bill and works at the US-support base in Schinnen (NL). He also met for the first time the adopter of Captain William Burd, Carli Nelissen from Schijndel, 3 km away from castle Heeswijk. Nine years ago Carli adopted the grave of Capt William Burd sr because he was and still is fascinated by the American operations during WWII, especially operation Market Garden around Arnhem and Nijmegen. His special interest lies in the combat actions of the 501st PIR (Klondike) of the 101st ABN DIV (Screaming Eagles). Together with Klondike-friends he simulates combat actions as a re-enactor.

On September 17, 1944 captain William Burd and his men landed near castle Heeswijk which was not the proper location. Some of his men were injured during the dropping and they were transferred to the castle. Burd stayed behind with them. The Germans located them and in a fire fight Burd was killed. His helmet, with a bullethole in it, and other of Burds‘ military possessions and documents are placed in a special vitrine in 501 st PIR HQ in in Fort Campbell, Kentucky.

Son William, born in 1943, never knew his father and hardly knew his mother because she gave him away for adoption after the war. After high school Bill jr. chose for a military career. After his service as a navy pilot he studied law, but in the end flying stayed his biggest passion, now as a civilian. “That was something else”: he said. It was like stepping from a Formula 1 race car into a citybus. Bill, Janice and Heather live in the neighbourhood of Miami, Florida.

After visiting Captain Burds’ grave, Bill travelled together with his family members and the adoptanter, for the first time to castle Heeswijk where his father was killed in action. A local historian will show them around and explain the history of the castle during WWII and during the liberation.

William Burd jr. with the adopter Carli Nelissen at the grave of father William Burd. 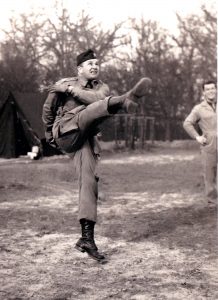 Photo: Captain William Burd was wounded during the allied invasion on June 6 in France and had to recuperate in Engeland. With success as this picture shows.